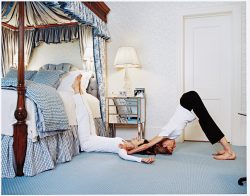 Me before Pilates, and after. Photography by Michael Lisnet, Vogue, October 2006

I quit Equinox, tired of dreading the gym while paying hundreds of dollars for it. My problem wasn’t the place—I’ve started and stopped Blink, Crunch, and ClassPass since moving to New York City—but more a feeling of isolation and occasional intimidation that came with attempting to be a better version of myself, by myself. I craved a new fitness routine and the strength I used to feel in high school, when I was a soccer player and horseback rider with flat abs and toned calves.

I knew the next workout I chose would have to be something I could stick to, one that didn’t trigger my old social anxiety of being the last to finish an exercise in P.E., but still gave me the happy-tired feeling of being physically spent. As it was, I felt like a crumpled version of myself, sometimes literally: I found it so hard to get out of bed in the morning that after hitting snooze seven times, I’d leave the house with sheet marks still on my cheek.

An effortlessly athletic colleague suggested Pilates and Lisa Jones Pilates specifically. A longtime dancer who trained at the Martha Graham School before becoming a professional Pilates instructor, Jones has developed a roster of private clients who often rely on her to train them for their physically demanding jobs, whether they’re in sports, acting, or modeling. She has worked with Lauren Hutton and helped models like Lily Donaldson prepare for the Victoria’s Secret Fashion Show.

When the founder of the technique, Joseph Pilates, opened his Manhattan studio in 1926, the method gained traction in the dance community before going mainstream in the late ’90s. A low-impact workout that emphasizes core strength, flexibility, and alignment, it has a continued association with the long, lean muscles that dancers display. And despite New York magazine’s 2015 “Pilatespocalypse” story that reported the technique was fading as the boutique fitness market boomed, a quick search of Tribeca shows five Pilates studios in a four-block radius. When high-speed, data-informed workouts are overwhelming us from all sides, perhaps a slower form of fitness feels just right.

I worried I might not be the Pilates type. (I imagined that type to be the aforementioned perfect specimens, or simply a bean-thin woman with matching workout sets for every day of the week.) And, used to team sports or spin, I was skeptical that Pilates would give me the feeling of release I wanted in a workout. Still, I packed my best leggings and made my way to Lisa’s softly lit Union Square space.

In our first session, she introduced me to the equipment: the Cadillac, the Wunda Chair, the Reformer. We started with mat exercises so I could orient myself to the form required for Pilates before working with any straps or seats. I was so used to fitness instruction backed by a soundtrack of dubstep Beyoncé that I feared a more conversational, one-on-one approach would drag on, but as I worked to coordinate my muscles in new ways according to Lisa’s steady instructions, I was surprised at how quickly our hour together passed. It was a meditative way of moving that, Lisa explained, would work from “the inside out.” (I noticed its outward effects, too, as later my legs trembled when I bent down to tie my shoes.)

When Lisa asked how, exactly, I’d like to tone my body, I realized my goals went beyond sculpted arms or a whittled waist. I wanted to pop up faster while surfing and finally address the shoulder ache that plagued me since I became a desk-bound employee. Lisa noted that the versatility of Pilates meant it could work on all of those levels. “You can do it on a restorative level,” she explains, while the performers she works with “do it to keep their stamina and to keep their body looking good, but also to stay in touch with their physicality for their work.” Because Pilates is low-impact, women can do it while pregnant, and Lisa’s clients range from 26 to 84 years old.

Joseph Pilates has a famous quote: “In 10 sessions you will feel the difference, in 20 you will see the difference, and in 30 you’ll have a whole new body.” I committed to 30 sessions, which broke down to about three times a week over three months. Lisa and I saw each other in the morning before I went to work, which meant I had to change my relationship with the snooze button. But it turned out that meeting an instructor one-on-one had a much greater effect on my accountability than any late fee could. Plus, by the fifth session or so, I started to look forward to Pilates. I didn’t break a sweat in the same way that I would in a HIIT class, but that was part of the appeal: I was able to get a workout that gave me results without feeling anxious that any moment of weakness would make me fall behind.

Every session was varied (the classical method of Pilates involves more than 500 different exercises), shaped around my answer to Lisa’s reliable question: “How is your body doing?” When I was sore after a run, she helped me loosen up. Post-travel, we worked out the imbalance I felt between my shoulders and in my hips after a night spent on a plane. She said that all of her clients that day were coming from traveling. Even if I couldn’t identify what exactly was out of place, Lisa was able to observe any tightness or fatigue and offer opportunities to stretch and strengthen.

I felt different early on. I started to notice which muscles carried me through the day. I felt a greater sense of stability while surfing, but also just while walking up the stairs from the subway. My shoulder pain faded, and a weird collarbone cramp that used to pop up on jogs stopped happening. As I got further into the sessions, my connection to and control over my body increased. I went running in just a sports bra and shorts. (Had I become a Pilates Type??)

By 20 sessions, I did look different. My abs were defined, and my body was longer. My crumpled self had been smoothed. I noticed more space between my head and shoulders, which seemed to have a sharpening effect on my jawline. As for a whole new body? The before and after pictures show more metamorphosis than complete transformation. But committing to more sessions, or any other routine, would be easy: I finally found a workout that made me want to wake up early—and renewed my faith in myself.